Paul Phillips just wanted to spend a nice night shopping with his girlfriend, but what he found inside that old antique shop changed his life. Now he was Myke Phoenix, superhero protector of Astor City, and lining up against the Forces of Evil in the World. Not even he knows how he inhabits the indestructible body of a long-dead warrior – all he knows is the fate of the city, the continent and perhaps the world depends on him. 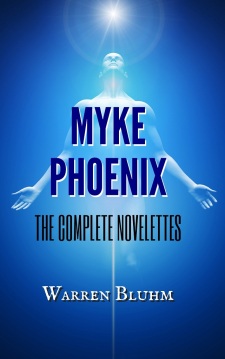 From the pulse-pounding origin story to the fateful attack from beyond space and history that changed Astor City forever, it’s all here: all 16 novelettes and two short stories in the Myke Phoenix canon collected in one edition. Here is the entire saga from the moment a mysterious spirit living in an unusual piece of pottery selects Paul Phillips, to the final showdown with the megalomaniacal talking dinosaur Deinonychus, with a new introduction by the author.

Or sample them one by one: 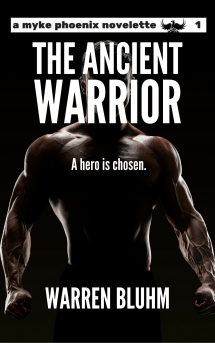 A ruthless crime boss sets his sights on destroying the radio talk show host who has targeted his empire, along with the stalwart news reporter who has been telling the story. This is a city that needs a hero, and the answer comes in the form of a long-lost legend and a mysterious bird out of myth. 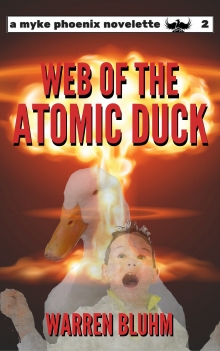 Half-man, half-duck as the result of a horrible accident when he was young, Quincy Quackenbos holds Astor City hostage so that he can learn more about the mysterious new superhero Myke Phoenix. Is he bluffing or does he really intend nuclear annihilation? Will he learn the secret of how to kill the city’s protector? Do ducks have souls? 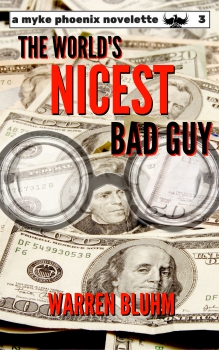 Jewelry stores and banks in Astor City are targeted by a mysteriously cheerful villain and his gang of thieves, who turn around and share a portion of the proceeds with worthy charities. Is Dr. Skull what he appears to be, or is something more insidious at play? Myke needs to find out before the gang strikes again and somebody gets hurt. 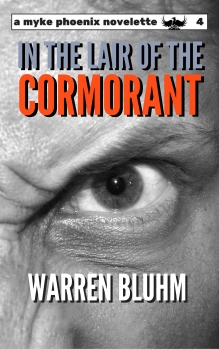 The leader of the tiny principality of Cormornia has a big idea: Rule the world under his peaceful benevolence. To begin his quest for global power, he plans to murder the leader of the free world. Can Myke Phoenix gather the evidence to stop Prince Cormorant’s mad plans, as his best friend lays dying miles away? 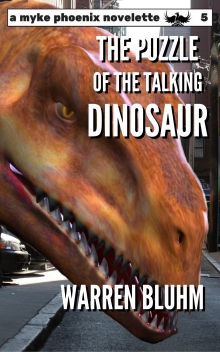 #5 – THE PUZZLE OF THE TALKING DINOSAUR

At some point in the life of a superhero must come the first encounter with the most evil of evil villains, the nemesis of nemeses, the bad guy above all bad guys, and in the case of Myke Phoenix, the time has come to meet Deinonychus, the ruthless and impossible being behind most of the bad stuff that happens in Astor City. After she murders her top underling in a courtroom and reveals Myke’s unexpected vulnerability, the city’s superpowered protector must track her down before she can strike again – or die trying. 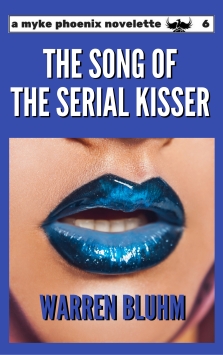 #6 – THE SONG OF THE SERIAL KISSER

Someone is kissing the women of Astor City – sneaking up on unsuspecting ladies and planting a big wet one on them. The police are baffled, but he’s not hurting the women so it’s not very high on their priorities. Longtime Astor City superhero protector Myke Phoenix is unaware of the spree until it gets personal. And when the city’s underworld decides to take matters into its own hands, Myke must decide whose side he’s on. This sixth Myke Phoenix adventure picks up a decade and a half after the fateful events of “The Puzzle of the Talking Dinosaur.” 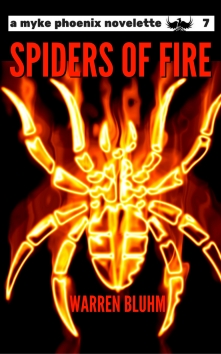 The annual Astor City Philanthropists’ Ball was going swimmingly until the giant spider spit flame and set everything on fire. When the city is threatened by unexpected things like giant spiders, they turn to Myke Phoenix. With the help of local scientists who just happen to be arachnologists, Myke races to stop the eight-legged monster before it can burn down the city or have baby spiders. 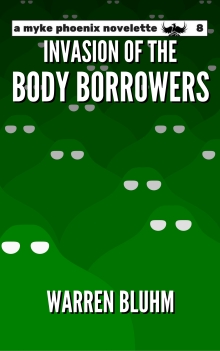 #8 – INVASION OF THE BODY BORROWERS

No one really thinks of themselves as evil, not even beings from another planet who turn ordinary humans into zombies.
Astor City is rocked when something from outer space crashes into a hill just outside town. Officials say it was a giant meteorite, but Myke Phoenix gets suspicious after a witness claims it was a spaceship and becomes convinced when his friends go into the hill and come back acting, well, not like themselves.
Can he solve the mystery before whatever is going to happen happens? 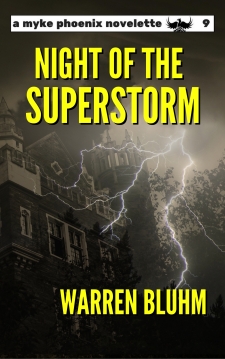 #9 – NIGHT OF THE SUPERSTORM

On the night of the worst storm in decades, Dana Phillips is among refugees from a wrecked cruise ship who find their way into a deserted mansion – and there a criminal genius is searching for hidden treasure with his gang of hoodlums. Their only hope – though they little suspect it – lies in the fact that Dana is married to the man whose alter ego is Myke Phoenix, protector of Astor City and force for good in the universe. But if Myke doesn’t know where his wife is, how can he come to their rescue? 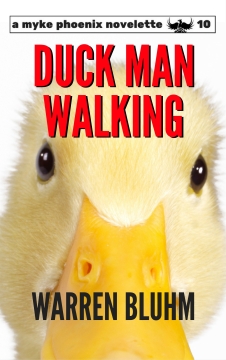 How do you trust a guy after he’s tried to kill you a few times? One of Myke Phoenix’s most impossible foes, the half-man-half-duck Quincy Quackenbos, is released from prison. Rumor has it that after years of trying he cracked the code and has developed the formula that can kill Myke Phoenix.
Are the rumors true? Or is Quackenbos telling the truth when he claims he’s turned his back on his criminal past? When mysterious ninjas kidnap Quincy, Myke Phoenix needs to decide whether the duck man is friend or foe before the kidnappers can extract the deadly formula. 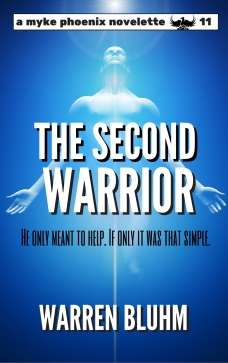 When he was told his new superpowers would be used for the betterment of mankind and to serve truth and justice, clearly Rick Mahoney was, well, misinformed. Yes, his powers are formidable: He has become Cory Hawke, with power that he intends to use for good and lift himself out of Astor City’s underworld. But you know what they say about good intentions. Cory steps in to help Myke Phoenix defeat the insidious Laser Master, but things go horribly wrong, and they must be made right before Laser Master’s gang can complete their most brazen operation. 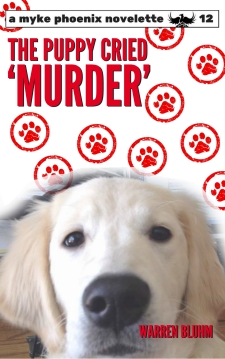 Goombah, a 4-month-old golden retriever, is haunted by a recurring dream of being shot. It seems she is a murder victim who has come back to life as a puppy with partial memories of how she died. But the memories fade in and out.

The good news is she’s been adopted by superhero Myke Phoenix. The bad news is the murder was related to a dangerous threat to a whole lot of people, and Goombah has to figure out how to warn Myke before she forgets it all and moves on to her inevitable life as an adorable dog. 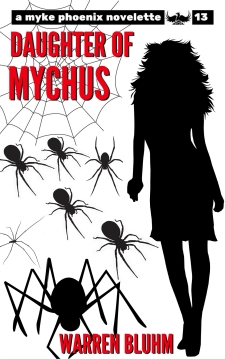 Badly injured when Myke Phoenix battled the firespiders, Dr. Terri Travers would give anything to get the use of her hand back – so she jumps at the chance when her biologist father offers an experimental cure. Not only does it go horribly wrong, but it unexpectedly releases the power of Mychala, the daughter of the ancient warrior Mychus, a.k.a. Myke Phoenix. Suddenly a superheroine, Dr. Travers must figure out how these new powers work, and quickly – because the firespiders have returned. 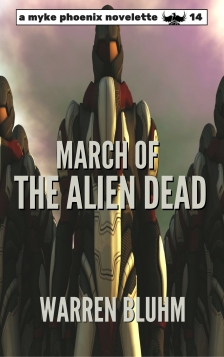 Once before, superhero Myke Phoenix encountered the Body Borrowers, alien blobs who seized people’s minds and used their earthly bodies to do their unearthly dirty work. And now, well, they’re back. This time Myke has a super partner, the powerful fire-spitting warrior named Mychala – but the aliens have new partners, too. Not only that, but they’ve taken control of the people they care about most. Will the two heroes be enough to defend our world? And will they be in time to save their loved ones? 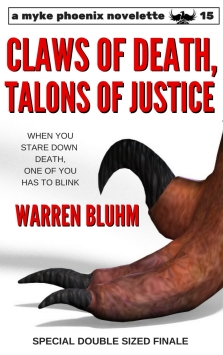 When you stare down death, one of you has to blink. For nearly 20 years Deinonychus, the malevolent last-of-her-kind dinosaur, has battled Myke Phoenix to a draw. Now, with the help of alien hordes and fire-spitting spiders, she makes her last stand against Myke and the ancient warrior’s powerful daughter, Mykala. But now the evil one has unlocked the secret of how to kill an invulnerable superhero. Can they foil her plans before a superhero dies? This is the heart-stopping final chapter of the Deinonychus saga. Big double-sized finale contains the novelettes Claws of Death and Talons of Justice.

What do you think? Cancel reply

Refuse to be Afraid 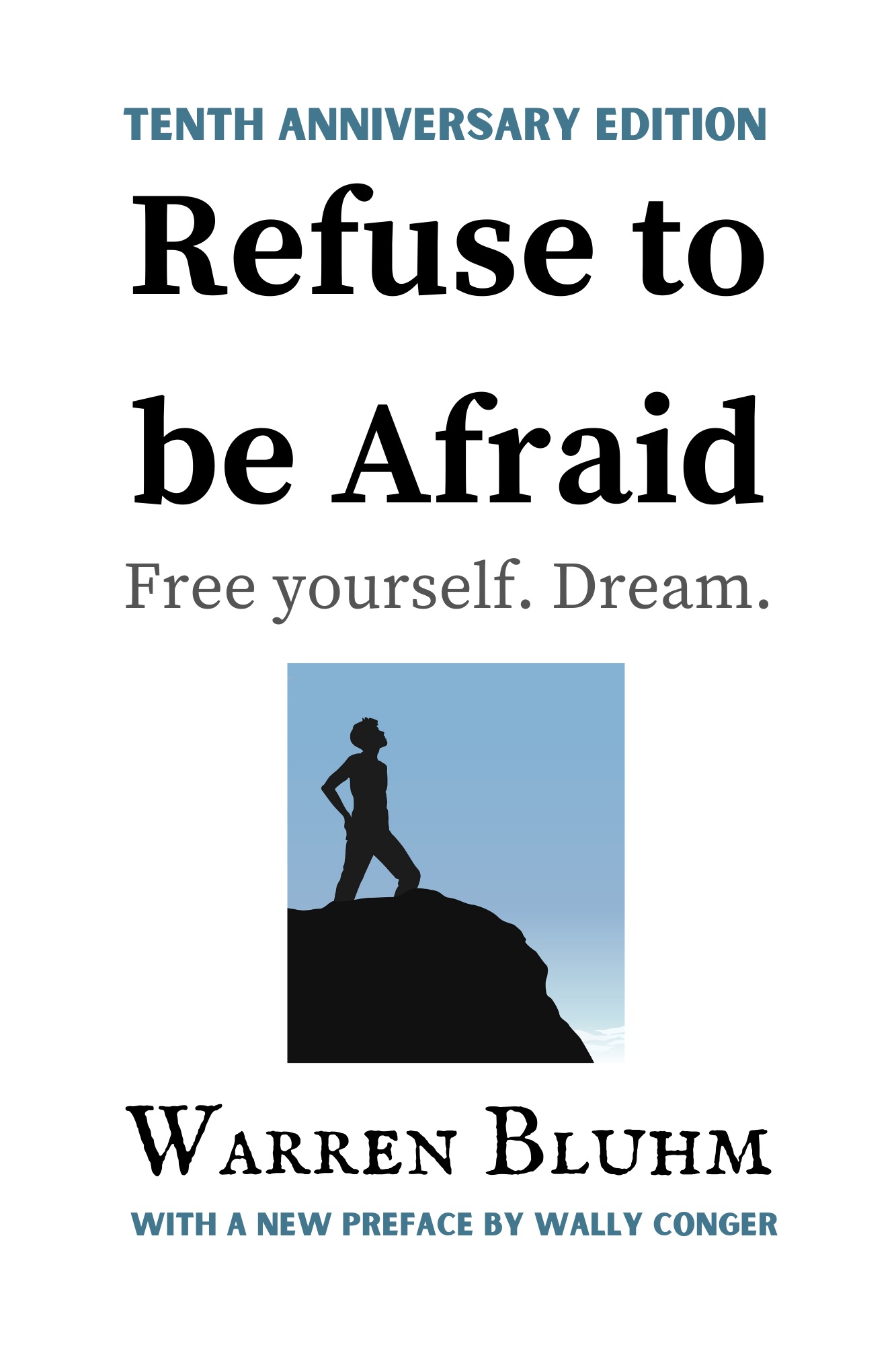 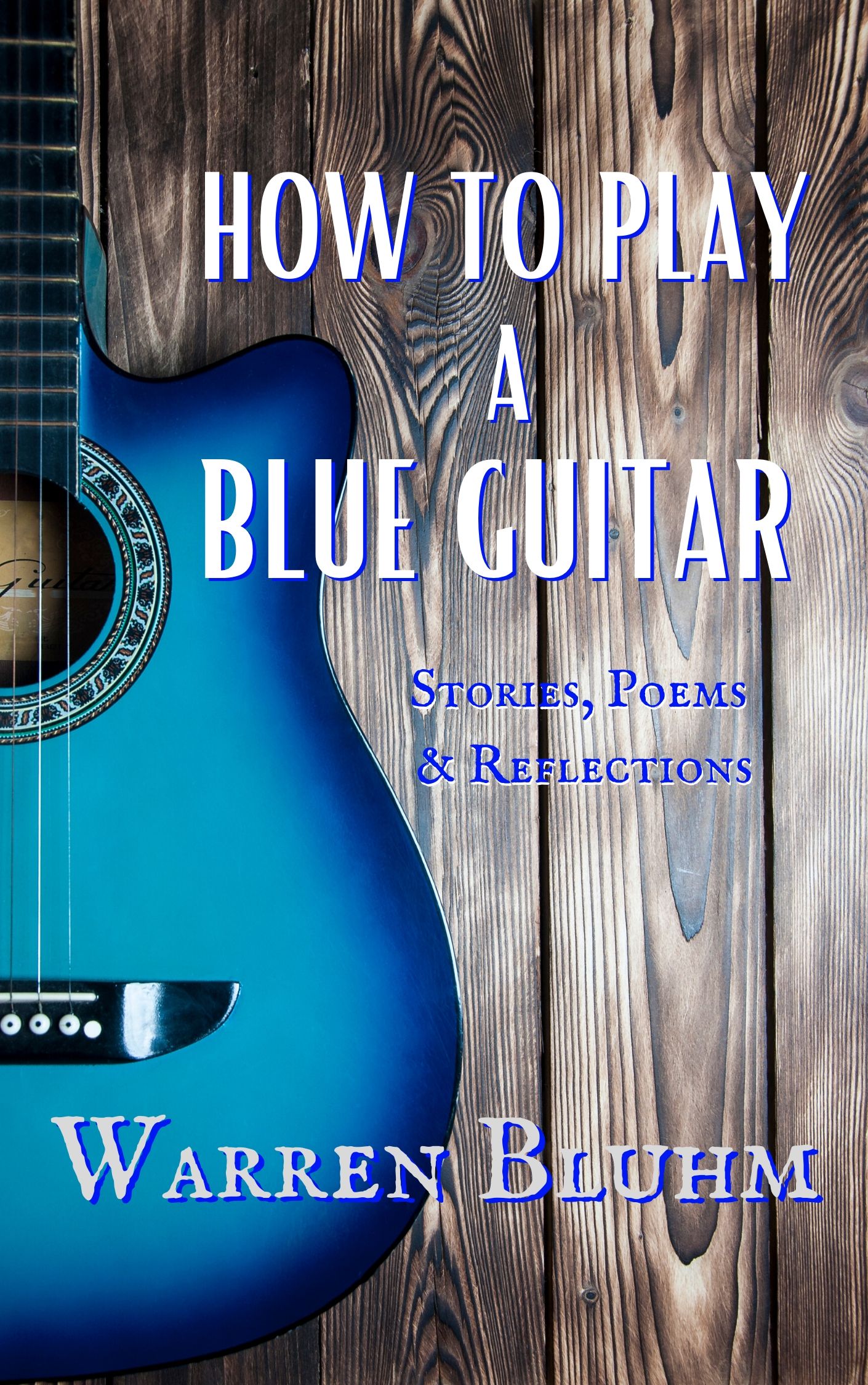 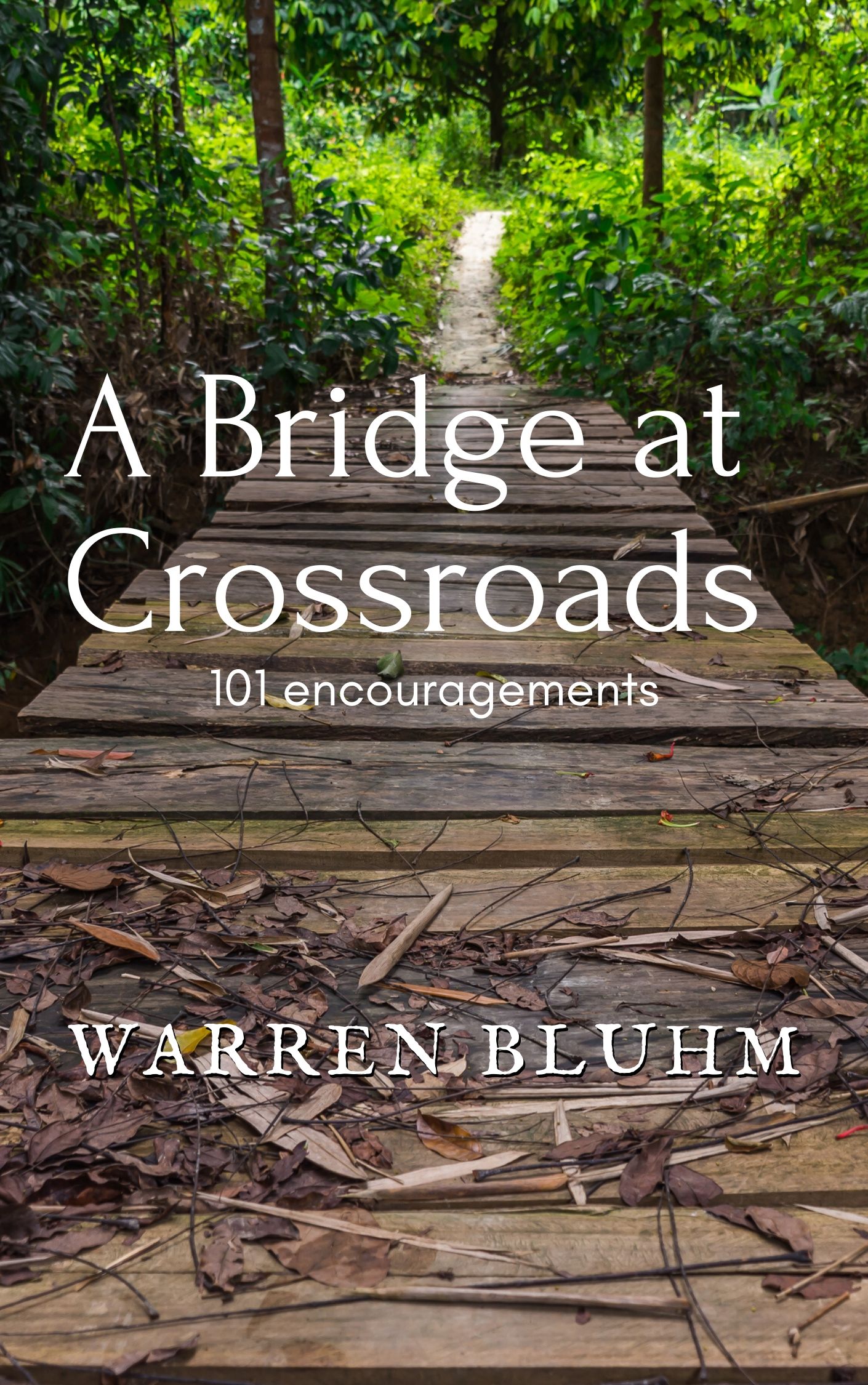 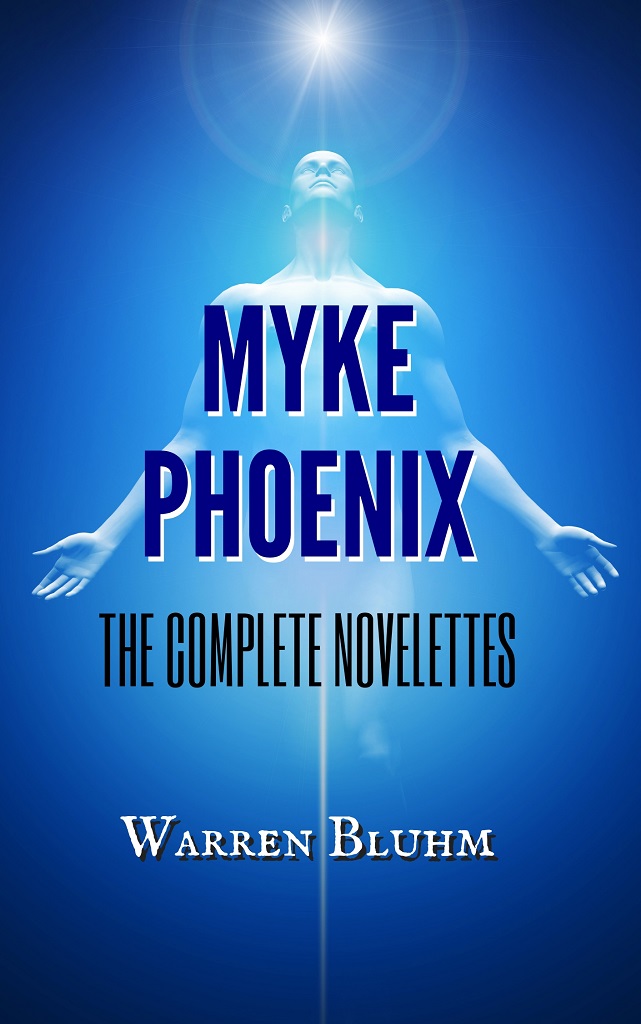 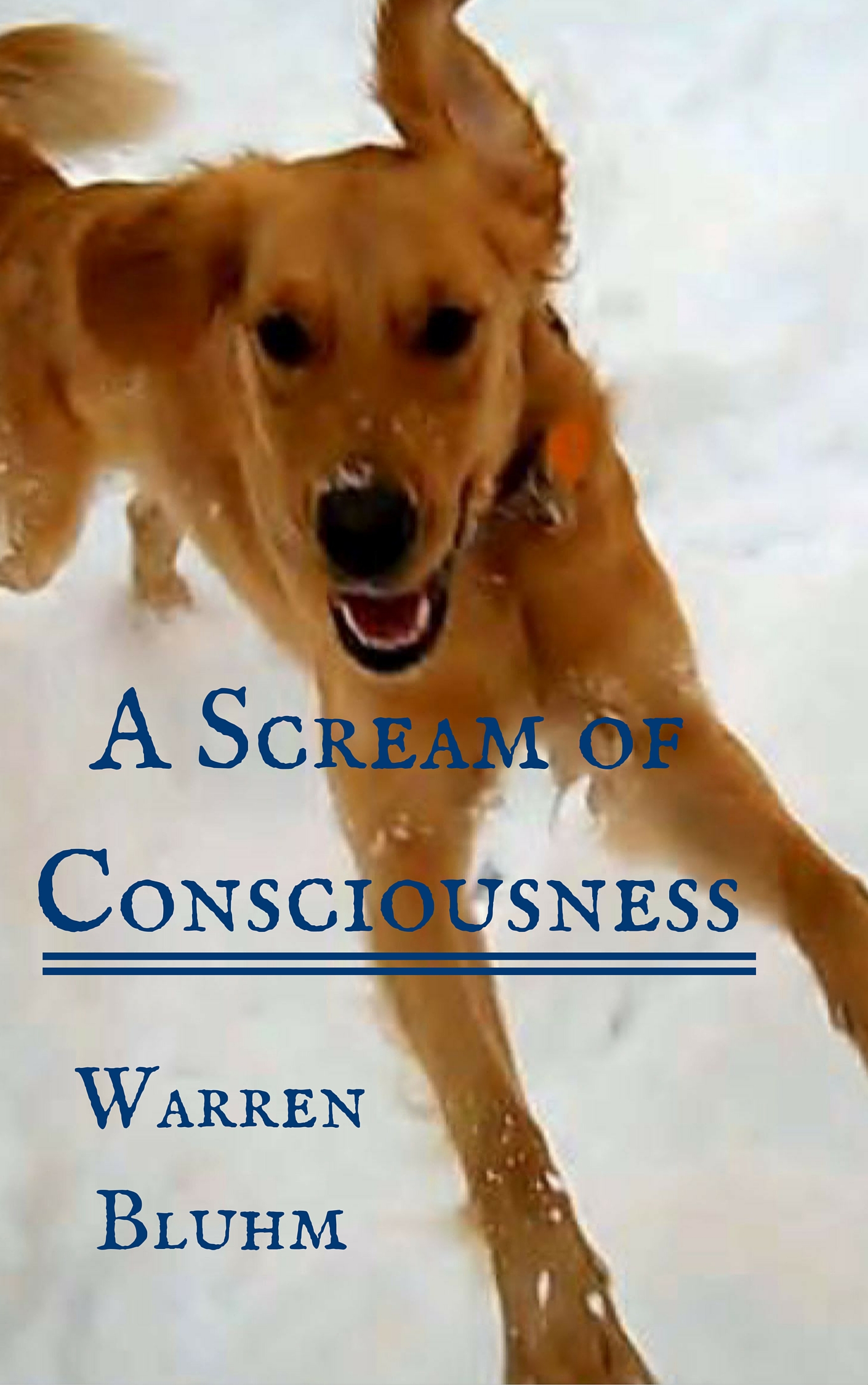 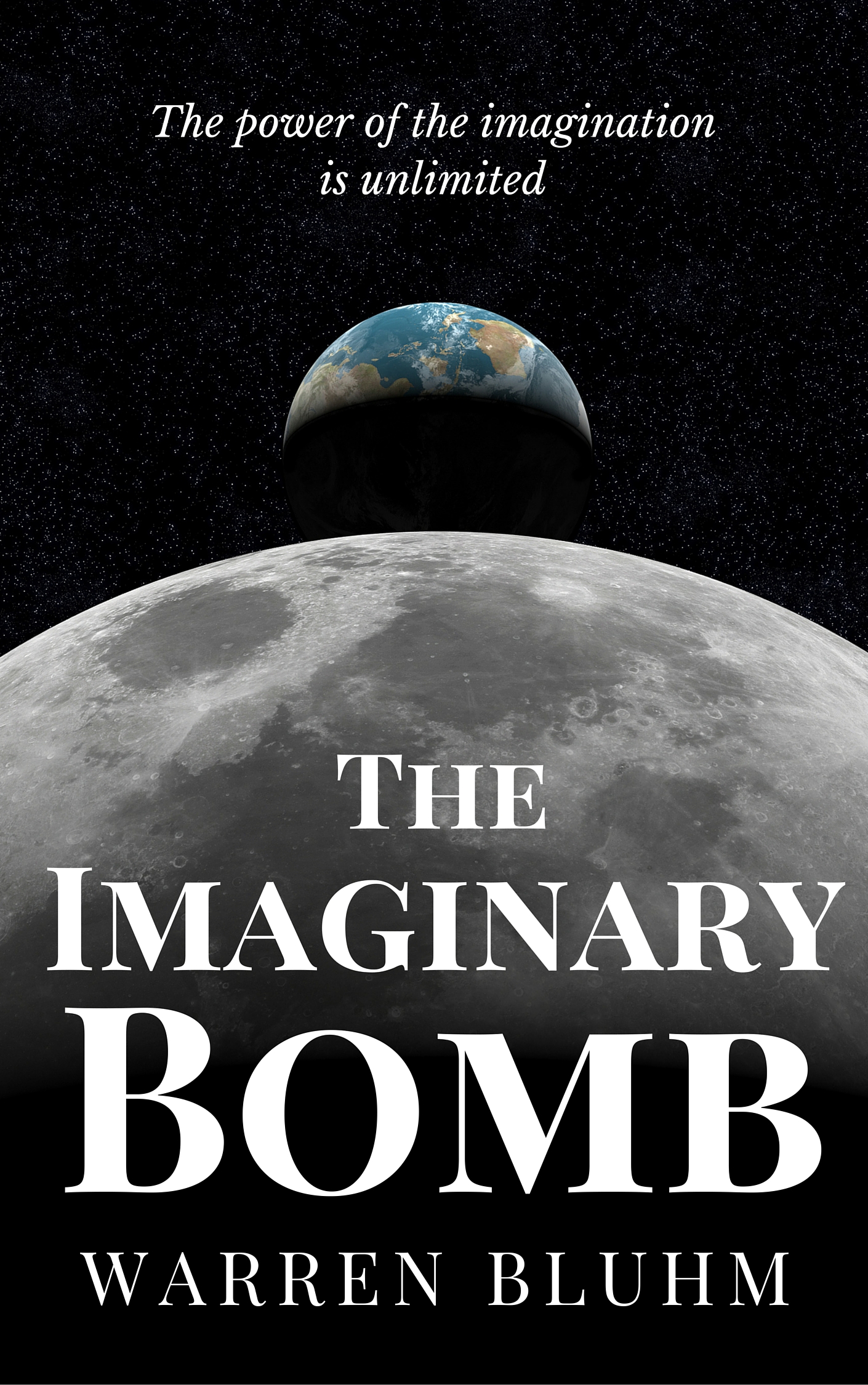 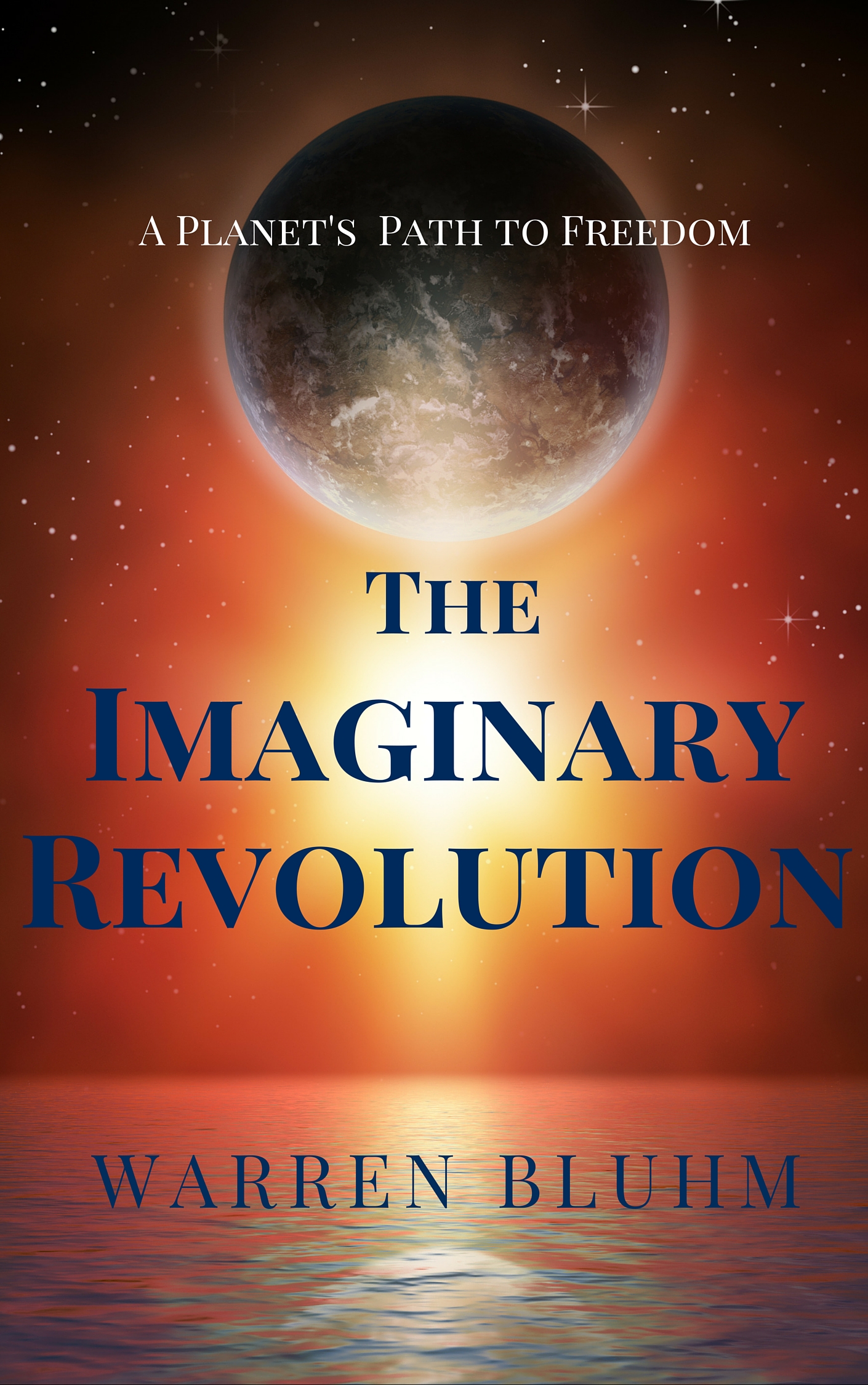